The final of the Cooling Prize competition was held on Tuesday night hosted by the Southern Geotechnical Group and the BGA at the University of Southampton.‎

The final of the Cooling Prize competition was held on Tuesday night hosted by the Southern Geotechnical Group and the BGA at the University of Southampton.‎

The three finalists, Letisha Rorke, William Beuckelaers and Georgios Katsigiannis, addressed subjects that challenged the perceived wisdom of geotechnics. All three gave excellent presentations demonstrating their understanding of the material included in their previously submitted papers. There was a high level of engagement with the audience who quizzed all three with probing questions which allowed them to demonstrate their breadth of knowledge around the subject matter.

Following prolonged debate the judges reached a unanimous decision to award the Cooling Prize to William Beuckelaers for his presentation on "fatigue life calculation of monopiles for offshore wind turbines using a kinematic hardening soil model"‎. The judges felt that William's presentation provided the best elaboration of the material described in his paper and provided an insight into how his research may be used in future to optimise offshore windfarm foundation design. William will receive a cheque from Ground Engineering for £200, a cut glass decanter and BGA sponsorship to the European Young Geotechnical Engineers conference to be held in Durham later this year ahead of the ECSMGE.‎

During the judge's deliberations Fleur Loveridge gave a presentation on "thermal response testing" after stepping in at the last minute for Ziggy Lubkowski who was unavoidably detained and unable to give his presentation on earthquake risk. 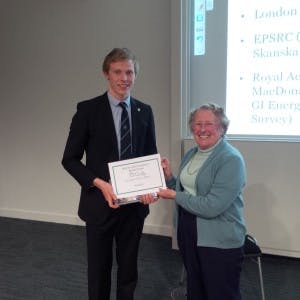