Sergio Solera reports from the 47th Cooling Prize Competition, held in Newcastle upon Tyne on the 21st March

Sergio Solera reports from the 47th Cooling Prize Competition, held in Newcastle upon Tyne on the 21st March

The 48th Cooling Prize Competition took place at the North of England Institute of Mining and Mechanical Engineers at Newcastle upon Tyne on 21st March 2017.  Four finalists were chosen this year to present their work.  The meeting was hosted by the Northern Geotechnical Group and chaired by Stephan Jefferis, Chairman of the British Geotechnical Association.  Approximately 35 people attended. 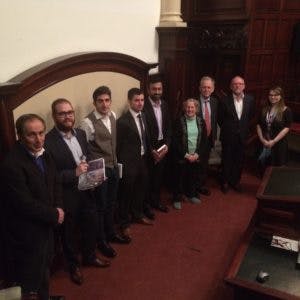 The event commenced with Dr Christine Cooling, the daughter of LF Cooling after whom the award is named, explaining the pioneering work on soil mechanics that her father carried out at the Building Research Station from the 1930s onwards and how he promoted the idea of creating a prize for young practitioners of geotechnics.

Francesc Mirada (Arup) presentation was on the Material Point Method (MPM) in slope stability analysis. He used data from the Selborne Cutting experiment (9m cut in Gault Clay induced to fail by pore water pressure increase) to validate and expand the work done by others using the MPM so that its results can be used to explain better the conditions leading to failure of the slope and to follow the time of the post failure behaviour of the unstable mass of soil.

Vipul Kumar (Mott MacDonald) presented his paper on Development of 3D numerical models for optimisation of ground improvement for bored tunnels in marine clay. Vipul explained how at-grade roads built over the notorious soft marine clays will be affected by ground loss due to climate change induced by sea level rise, thus requiring additional fill.  Vipul used Plaxis 3D using advance constitutive models such as Soft Soil to model the soil-structure interaction between the tunnel lining and the consolidating soils. As the permitted road tolerances are very tight (15mm and 1:1000 over 3m of tunnel) jet grouting is proposed and modelled in Plaxis at the transition of the tunnels into the stations, based on previous experience and the use of EC7 to evaluate the raw GI data.

Ronan Royston (Oxford and Ward and Burke Construction) gave a very interesting presentation on the Monitoring of the construction of a large diameter caisson in clay. The data presented is quite unique, as unlike most caissons which are sunk using precast lining, this one was constructed using 1m thick in situ reinforced concrete sections, sunk in soft clays.  An innovative levelling system to within 1mm was used, together with Cambridge type Stroud cells load cells to measure normal and shear stresses, installed at the leading cutting edge and 5.4m above, to monitor the stresses sinking.  The real-time data was provided to the site engineer to control the shaft sinking and will also provide data for future design of this type of shafts.   The presentation included a video of the caisson sinking during construction and sinking.

While the judges deliberating on their verdict, Prof. David Toll of Durham University delivered an excellent presentation on Suction in unsaturated soils.  Prof Toll explained that new tensiometer developed at Durham University is now capable of measuring suction up to 2MPa (previously only readings up to 100kPa were possible due to cavitation).  Field data from an instrumented embankment constructed with glacial till of medium plasticity (Durham Till) near Newcastle shows that the drying and wetting process leads to the long term degradation of the soil, with the undrained shear strength reducing with time for a given moisture content.  Prof Toll suggested that measuring suction may be a better indicator than the moisture content.    This degradation should be expected in the upper shallow soils, extending less to 1-2m depth.

The judges awarded the 48th Cooling Prize Competition to Francesc Mirada of Arup.  This paper will be delivered at the BGA Annual Conference on 21st June 2017. 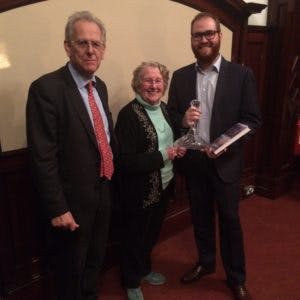