The John Michell Award Lecture - A Career Embedded in the Ground

This is an on-line event, and pre-registration is required.

Attendees should register for the event, and will receive a booking confirmation and the viewing link by email.

This event is free to attend.

Advance booking is required for this event

The first part of the lecture will concentrate on technical aspects; technical competence being the primary attribute of an engineer. It will discuss the forces imposed on embedded retaining walls from the retained ground and groundwater, comparing theoretical and measured values. This will include specific examples from two key projects: The Jubilee Line Extension Project and the Copenhagen Metro. Several examples of pile design and performance from more recent projects will be reviewed, providing some avenues for future research. The lecture will include a reassessment of the partial factor approach to ultimate limit state geotechnical design. This section will conclude with a discussion on ‘value engineering’.

The second part of the lecture will broaden the subject matter to deal with some of the additional topics that are included as part of the Chartered Professional Review (CPR), discussing the role of the engineer in projects today and the role of the engineer in business. Important decisions about the procurement route and the type of contract are made at an early stage of civil engineering projects which strongly influence the outcome of the contracts. This will be discussed, based on personal experience, assessing the apparent success or otherwise of different contracts.

David Beadman studied engineering at St John’s College, Cambridge, specialising in Soil Mechanics and Structures in the final year. After graduating in 1979, he joined W S Akins, briefly working in its design office before working on site for a couple of years at Drax Power Station Completion Project. Subsequent experience with Atkins and other companies focussed largely on structural engineering before joining Bachy in 1991.

Bachy wanted structural experience in addition to geotechnical knowledge to strengthen its design expertise for its core business; installing piles and retaining walls. Bachy was fortunate to win contracts for many of the underground stations at the east end of the Jubilee Line Extension Project including Canada Water, Canary Wharf and North Greenwich stations. David led the designs of the temporary embedded retaining walls. The Copenhagen Metro followed with Bachy Soletanche being part of the design and build joint venture and he took the role of design manager for the joint venture.

After periods with the geotechnical teams at Arup and Tony Gee & Partners, in 2008 David was approached by John Byrne and Michael Looby to open an office in England. Byrne Looby’s Guildford office soon grew into a profitable business employing twenty-five geotechnical and structural engineers with another five in Manchester. Piling contractors provided a significant part of the turnover in the early years. As the company grew, the client base grew to include many main contractors amongst others. Byrne Looby has become widely known across the United Kingdom. 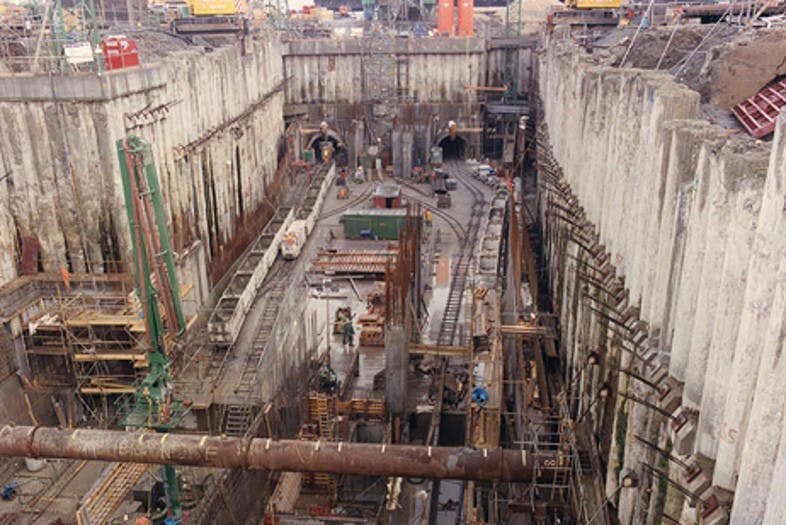